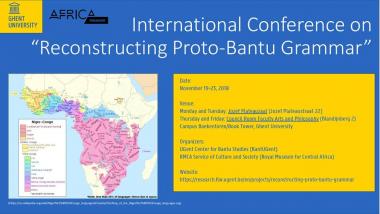 THEME OF THE CONFERENCE

The birth of Bantu linguistics as a scientific discipline is commonly attributed to Wilhelm Heinrich Bleek (1827-1875), who established Bantu as a family and gave it the name it still has today. Carl Meinhof (1857-1944) defined Bantu as a genealogical unity, i.e. a family of languages that descend from a common ancestor, which can be reconstructed through the establishment of regular sound correspondences among modern-day languages. He laid the foundations for the reconstruction of Ur-Bantu, known today as Proto-Bantu (PB), the putative common ancestor (Meinhof 1899). Benefiting from a classical training in comparative Indo-European philology, Meinhof primarily relied on the Comparative Method, as did his successors in Bantu reconstruction studies, such as Meeussen (1967, 1980), Guthrie (1967, 1970a, b, 1971), Coupez et al. (1998), and Bastin et al. (2002). Proto-Bantu with its estimated time depth of 4000 to 5000 years (Vansina 1995, Blench 2006) has been reconstructed from language data that are younger than 150 years. The most recent reference works in Bantu lexical and grammatical reconstruction are 15 years (Bastin et al. 2002) and 50 years old (Meeussen 1967) respectively. Over the past decades, cumulative descriptive research has added to the documentation of variation among Bantu languages and allows for even more effective applications of the Comparative Method. A systematic update of research in both Bantu lexical and grammatical reconstruction is urgently needed. Last year, Bantu Grammatical Reconstructions (1967) of the Belgian linguist A.E. Meeussen celebrated its 50th anniversary. In order to mark this important milestone in the history of Bantu linguistics and to start with an update of Proto-Bantu grammar reconstruction, we will organize a five-day international conference on “Reconstructing Proto-Bantu Grammar” in Belgium (Gent + Tervuren) from November 19 to November 23, 2018.

OBJECTIVE OF THE CONFERENCE

The international conference intends to gather today’s junior and senior scholars with the most relevant expertise in comparative Bantu studies in order to reflect together on how to realize a state-of-the-art update of Bantu Grammatical Reconstructions by Meeussen (1967). Given the large amount of Bantu language data that have become available since 1967, the vastness of the Bantu language family and the wide array of grammatical topics to be addressed, such an update can no longer be a one-man-project in 2018. It necessarily is a collaborative project building on the expertise of several scholars. Given the way in which the field developed over the past 50 years and the variability of approaches and theoretical frameworks it entails, such an update cannot simply be resumed where it was left by Meeussen in 1967. Underlying assumptions, principles and methods need to be discussed and established, which is one of the objectives of this international conference, along with assessing the implications of the huge mass of newly available data for reconstructing different aspects of Proto-Bantu grammar.